Part of being a fierce af woman is having to deal with blood coming out of your vag once a month. Not even going to apologize for being too graphic, because that is the truth.

My roommates in college started using a menstrual cup before I had heard of it and it never intrigued me because I had heard their horror stories about it taking a long time to fit the cup up there and I didn’t want to think about the mess.

But then, I started thinking about toxicity and the pesticides companies spray on cotton and thought – wait, does that mean I am putting those chemicals up my vagina??? That my most vulnerable and most sacred space in my body is absorbing toxic chemicals? OH HELL NAH.

So I went out and bought myself a menstrual cup and never looked back. Here are a couple reasons why they are the best thing you can do for you and your #flow.

First and foremost, it’s saved me so much time and money! I bought my re-usable cup, which cost about $40 from Whole Foods. You can get them cheaper on Amazon, but I didn’t want to wait those 2 days for shipping, so I splurged.

Anyways, that $40 is all I had to spend on my period over the last year or so that I’ve been using it. THAT’S IT. I used to have to buy tampons every 2 cycles and tampons are expensive! I would spend about $15 every 2 months, which comes to about $90/year.

Also, it was so annoying, running out of tampons when I needed them most, so I would end up taking extra trips to the grocery store just to buy tampons. With my cup, I never have to worry about that, it’s always there when I need it.

You can leave the cup up there for up to 12 hours, which is not the case with tampons. I’ve always been terrified of getting toxic shock syndrome ever since my 6th grade gym coach told us her friend died from it, and I’d always be wondering “how long ago did I put this tampon in?” and having to change it every 4-8 hours.

The cup has totally eased my fears and now I just put it in the morning, check it halfway through the day, and then again at night. That’s it. It saves a lot of time of running to the bathroom to check for leaks and/or change your pad/tampon.

GOOD FOR THE ENVIRONMENT AND YOUR VAG

Think about all the waste you’ve accumulated on menstrual products over the years. Pads come with the box, then the outer wrapping, the actual pad itself, and the tape that covers the sticky part. Tampons are the same, with the box, the plastic wrapping, and plastic applicator. That adds up to quite a lot!

Since the cup is re-usable, it’s great for the environment because you’re #reducing and #reusing. 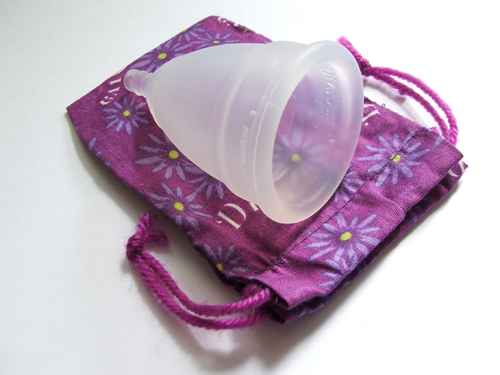 My cup is made out of silicone which is non toxic and comes with a cute little pouch to store it in so you never have to waste extra product.

AND like I mentioned before, you’re no longer putting toxic chemicals up there, so it’s better for the overall health of your womanly areas as well.

GET IN TOUCH WITH YOUR WOMANLY #FLOW

Something I didn’t expect to love about the menstrual cup, but I discovered is so GREAT is it gets you so much more in tune with your body, because you can actually see how heavy/light your flow is. When I used tampons, I was never aware of how much I bled, because it always just soaked it all up and I never gave it a second thought.

Nowadays, I love being in touch with my flow and understanding how much or how little I’m bleeding as my cycle progresses.

I’m sure some women’s concerns are that it’s messy and/or gross, but you don’t need to be grossed out with your own bodily fluids. It’s a part of your womanhood, face that and embrace it, because it’s a beautiful and natural process.

It does get messy sometimes like if your cuppeth runneth over if you know what I mean, but it’s never been a big deal for me, you just clean it up and move on, just as you would if your tampon leaked or something.

It’s super easy to clean the cup. You just have to boil it in between every cycle. I usually boil it for 5-10 min at the end of my cycle to clean off any residue, and then at the beginning of my next cycle before I start using it to kill off any bacteria/germs that might have grown there while it laid in it’s pouch for 3-4 weeks.

I do worry that i’ll put it in dirty or something and give myself an infection, but as long as you’re cleaning it regularly then I think it’s fine and it hasn’t happened so far, so bless up.

I really think every woman is doing a disservice to themselves and the environment if they’re still using tampons when they could be using a menstrual cup.

It may not be for you, but don’t knock it before you try it. All my love to all you bleeding merms ❤